Marlon will meet you and provide a weapon when you first enter the Mines in Stardew Valley. This is possible any time after day 5 and allows you to begin the combat skill. You can buy more weapons the futher you progress and complete monster-slaying goals for the Adventurer's Guild, located in the northeastern portion of the map.

Stardew Valley's Combat skill indicates your character's proficiency at fighting monsters found in the mines and Skull Cavern. Monsters are found elsewhere, but not in such large concentrations as in those two areas. Each Combat skill level you gain unlocks new crafting recipes and improves your prowess in combat by just a little.

Struck by a slime, my character takes a slowing status ailment which benefits the slime for a few seconds. I can't step forward fast enough to stop his next jumping attack. Slimes are easy solo, harder in groups.

The Combat skill is leveled by killing monsters through any means - from sword, to bomb or slingshot. The amount of experience gained is based upon the difficulty of the monster, in general. Further in the mines and inside the Skull Cavern, harder monsters will appear which are worth much more experience.

Each level of the combat skill increases your character's maximum health by +5, which doesn't seem like much but will result in you having 50% more HP by the time you've reached level 10. There is no weapon proficiency, as swinging a sword, mace, etc. does not take any energy. This is to avoid you collapsing while fighting, I suppose. 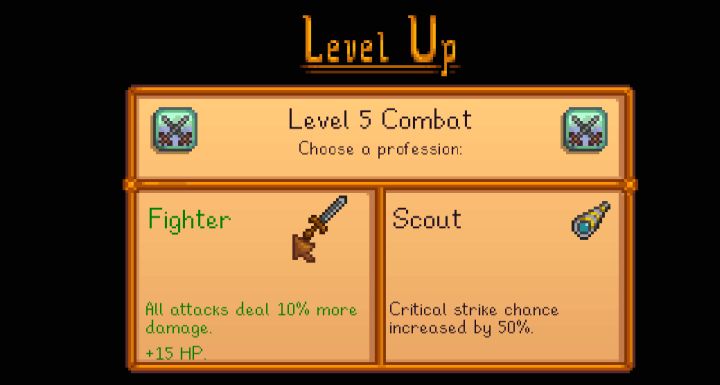 Killing monsters raises the combat skill and unlocks the recipes below.

Some monsters drop useful items, such as these sprites, which supply coal when killed.

When you go to the mines, you should get your first weapon and be able to slay slimes and bats without much danger. Enemies like slimes are best fought by pinning them against the wall, where they can be stunlocked. When that's not possible, you can simply slash, step, slash and prevent them using their special jump attack. Many monsters are vulnerable to your knockback, so combat is quite simple and a small roadblock to finding ore in the mines. You will want to level combat but it should come fairly naturally.

Bringing healing items to combat is essential. A mine run can be cut short very early if you have nothing with which to heal your character. Cooked foods are generally better, though some foods like Cauliflower provide a bit better healing. 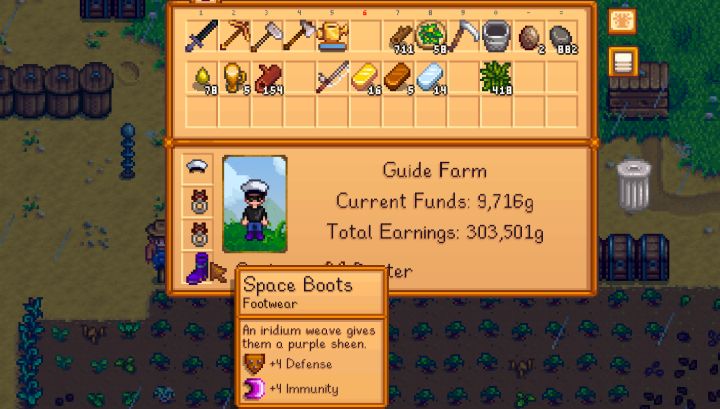 On the inventory screen, you can equip rings and boots. Hats have no effect on combat capabilities and are only for decoration.

You'll find a variety of effects on rings, but boots primarily focus on raising Defense and Immunity, the former can be found on some weapons. Defense reduces the damage your character takes in combat (I think by a flat amount). Immunity reduces the likelihood your character will be hit with negative status effects, such as the slimes' slowing ability.

Monsters with far more HP and Defense are found further in the Mines. They're not necessarily harder but new weapons are necessary to kill them, as you can do 0 damage.

As you progress through the mine, you may find that some monsters drop weapons that are better than what you have. However, you'll probably find better items at the Adventurer's Guild. The amount of weapons and gear offered by them increases as you delve further into the mines. Notable items are the Silver Saber (750g, reached level 20), Templar's Blade (4,000G, level 55), Steel Falchion (9,000G, level 90), and Lava Katana (25,000G, reached the bottom of the mines). The Lava Katana will be immensely helpful in the Skull Cavern, so it's suggested you eventually save up for it unless you get a very lucky Prismatic Shard Drop

As of 1.07 the best weapon in Stardew Valley is the Galaxy Sword. You can get this weapon by finding a Prismatic Shard. These shards drop from Iridium rocks in the mines, as well as the monsters you'll fight there. The drop chance is very low. Going on lucky days and using foods that boost luck can help (see the Skull Cavern page for a list of foods. Once you have the shard, you use it at the center of 3 pillars in Calico Desert. 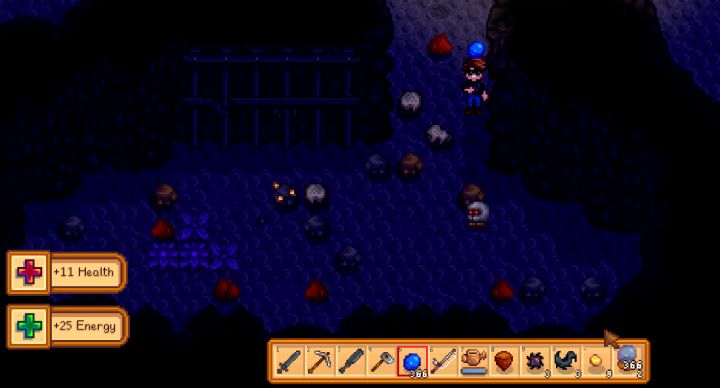 Some healing items are really awful, though they pause combat like any other. It's annoying to eat 5 items to heal, when you could've had two. Blueberries are not very good for this, but Cauliflower is great!

Cooking foods can be a rather involved process. Salads are the best item to buy from the tavern for healing. As far as growing crops, eating multiple fruits which are worth only 10 health each is rather annoying. Good for energy, sure, but not so good for the life meter. I went through each season's fruits and veggies to see those which have the best healing - bear in mind that gold-star quality will result in nearly doubled healing:

Stardew Valley is now version 1.1, which comes with some significant changes. I have some updating to do as a result. Certain fruits (such as blueberries/cranberries) have had their sell prices reduced significantly to give players more reason to grow other produce. This makes tables with sales values wrong. I will fix them as soon as possible. You can see the full list of change notes here.

Follow @carlsguides
My Stardew Valley Guide coverage has just begun as of July 8, 2016. I plan to put out pages regularly until I've covered most topics. For now I've completed guides on: